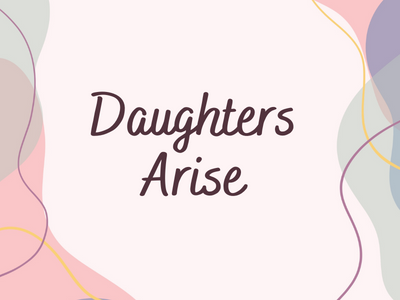 Judges 5:7- Village life ceased, it ceased in Israel, Until I, Deborah, arose, Arose a mother in Israel.

God took time to create women. Everything else was created soon.

The Lord gave women a Womb

The devil deceived Eve. God asked Adam what happened and he complained about Eve and put the blame on her. God asked Eve and she did not blame anybody. She is relational. She said it was the serpent who deceived her. God told Adam, “I won't grant you anything.” That’s why Proverbs 18 says, He who finds a wife finds a good thing. That means that God won’t simply grant but you need to go finding for the right one.

Only those who value what God has given them will be positioned to receive even more from the Lord- Whether it is ministry, grace, business etc.

Before you begin to blossom, the enemy tries to destroy them. But those who fast, pray and worship and believe the Word, there will be a life flowing through you to cancel every power of the devil! It is working for you!

WHAT KILLS A WOMAN?

People will say something is wrong with you. But you are going to raise up.

Some of you are dying by Inferiority complex. There is no confidence. The Lord is going to raise up a generation of women who will come out of this bondage and will do double of what men have done for the glory of God.

Recently someone was telling me about a testimony about a lady they had brought to church. She was from another country and she had no faith in God. But she attended just one service and her life changed completely. She gave her life to the Lord and she is changed person now. That is what God’s power can do. There are many women sitting here, and the Holy Spirit knows your struggles, challenges, issues.

But no matter what issues you face, there is a Person you can touch and follow- the PERSON OF JESUS CHRIST

How will you arise?

If you have a father like that, daughters will rise. Fathers who are ready to fall at the feet of Jesus.

Where is your father?

lives are built and they are walking in the blessing and in the purpose of God. That is the Father’s heart!

We need a father’s heart

Daughters are not allowed to carry excess luggage. Lay it down at the feet of Jesus. • I have made mistakes but I will raise up. It is my season to arise.

It takes a father and a mother to raise up a daughter.

HOW WILL YOU ARISE?

You will arise by the level of people God sends your way.

The Holy Spirit is saying this to someone- you will never go down. You will only go up from here. You will not even go down an inch.

There are four kinds of people

The things that make a person successful are invisible. Faith is invisible.

Forgive and love everybody but don't trust everybody.

These are persons like Jairus. May you recognise the people who God has sent to help you. Holy Spirit open my eyes. Identify the relationships in your life.

After God, it is you who can raise yourself up.

WHO CAN HELP YOU?

Hypersensitivity to what people will say will bring you down.

God will take you to the next level.

13 meaningful touches every day that a husband should give his wife. That will help psychological heal and offer you assurance. Just holding hands. Go home and practice. I am just talking about your spouses and not somebody else!

Pastors and men of God over your life are worthy double honour.