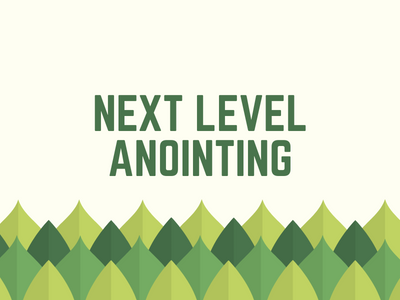 To subdue nations before him

And loose the armor of kings,

To open before him the double doors,

So that the gates will not be shut:

2‘I will go before you

I will break in pieces the gates of bronze

And cut the bars of iron.

3I will give you the treasures of darkness

And hidden riches of secret places,

That you may know that I, the LORD,

Who call you by your name,

Am the God of Israel.

I refuse to be where I am now, say it loud.

Don’t think how this will happen? The Holy Spirit will do it. You only need to say, ‘Lord I am ready to enter into the next level’. In life God has created us to move from one level to another level. To move us from one phase of life to another phase- this is God’s desire.

Just like in the sphere of education- Will you study all your life in kindergarten? Even in education, there are levels, grade 1 to 10 and then degree and PhD. You can’t study in nursery all your life.

God has kept levels in your life. Thee are levels in the ministry. If you are stuck in one level only, it is very frustrating. God is not wishing that you are stuck only in one level. That’s why the word says that He transforms us from glory to glory, from strength to strength, from faith to faith.

That’s why you need to say I am stepping into the next level. Lord anoint me to get into the next level by His grace. The devil wants you to be stagnant. He wishes that you remain stuck! Today God is releasing an anointing upon His church.

If your car gets stuck in a traffic jam, the cars behind you will get annoyed with you. Only you know that your car has broken down but those behind you don’t; know that. They may ask you to get out of their way.

This morning heavens do not want you to be stuck in one place.

I don’t want a mental break down. I won’t have a mental, financial, spiritual breakdown. God is anointing me so that I don’t remain stuck! Receive it your spirit. UNSTUCK!! Time to be unstuck! The oil is going to flow!

Psalm 92:10- You have exalted my horn like that of a wild ox; fine oils have been poured onme.

What is that horn? It is your authority, your strength. God says that with new oil God is anointing your horn? Why? To take you forward. To move you ahead.

in forward like an army. God is raising up armies of God in the east, north, west and south of India. Are you a part of this army? If yes, say YES Lord!

1 Samuel 9:20- 0 As for your donkeys which were lost three days ago, do not be concerned about them, for they have been found. And for whom are all things that are desirable in Israel? Are they not for you and for all your father’s household (family)?”

God wants to bring your entire family to a royal status

Saul says, I am the least of the tribes but God doesn’t look at your tribe to pick you. God deliberately chose the weak to shame the strong. God chose the foolish to shame the wise. I am

Many people may have called you useless but heavens have set their eyes on you. He is TOOO God! Only He can do something.

1 Samuel 16:7- Man is moved by the outward appearance but Jehovah looks at the heart.

Nothing outwardly will take you to the next level but it is only the anointing oil of the Holy Spirit.

The season ahead is that where those who are insignificant will be raised by the Lord. Those who were hiding in jungles, God will bring them to light. God will bring to the forefront those preachers who nobody wanted.

The first anointing took him to the palace.

The second time, made him the king of Judah

The third time, made him the king of entire Israel.

There is another level for you! God has kept it for you.

To subdue nations before him

And loose the armor of kings,

To open before him the double doors,

So that the gates will not be shut:

2‘I will go before you

I will break in pieces the gates of bronze

And cut the bars of iron.

3I will give you the treasures of darkness

And hidden riches of secret places,

That you may know that I, the LORD,

Who call you by your name,

Am the God of Israel.

There are prophecies about you! You need to find it from the Bible. Your faith should be based on the prophecy that came through from the Word of God.

To subdue nations before him and loose the armor of kings,

women are beautiful to behold but not one is married. There is a yoke that stops them from moving into the next level. The devil says, you sit there beautiful, have boyfriends, have fun but I won’t let you move to the level of marriage. That which breaks yokes is not your smartness, it is the anointing.

Why does the anointing come upon you? To lose the armour of kings!

To open before him the double doors, So that the gates will not be shut:

Last week, I was in Nagpur, when I was sitting in the room in prayer, the Lord said, you go wherever you want and the doors will open ask of me and I will give you the nations. • For certain people, doors of marriage, education, business, universities be opened in Jesus name.

Similarly, people may have passports, visa, influence but yokes are stopping you from entering into the new nations. God is breaking off that yoke by the power of His anointing. This is also for your children and not just for you.

Nations of the world will open for some of you. Doors of health will open.

A paper that needs out be released from the health board of a nation is being releasedmiraculously. Heavens are opening out that block.

The Holy Spirit will take you walking miraculously in paths that you never have traversed in the past miraculously.

Hebrews 1:9- You have loved righteousness and hated wickedness; therefore God, your God, has set you above your companions by anointing you with the oil of joy.” Because you love righteousness and hate wickedness, I have anointed you with fresh oil. • If there are mistakes you have made in your life, ask him forgiveness. You cannot carry the oil and sin together. Ask Him for forgiveness. There is oil residing in you.