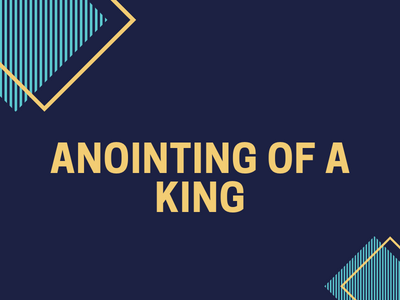 Anointing of a King

Anointing of a King

Revelations 1:5- 5 and from Jesus Christ, the faithful witness, the firstborn from the dead, and the ruler over the kings of the earth. To Him who [a]loved us and washed us from our sins in His own blood, 6 and has made us [b]kings and priests to His God and Father, to Him be glory and dominion forever and ever. Amen.

Romans 5:8-10- 8 But God demonstrates His own love toward us, in that while we were still sinners, Christ died for us. 9 Much more then, having now been justified by His blood, we shall be saved from wrath through Him. 10 For if when we were enemies we were reconciled to God through the death of His Son, much more, having been reconciled, we shall be saved by His life.

You are stepping into a season of authority.

The devil has some strength but you have authority.

1 Kings 3:7-9- 7 Now, O Lord my God, You have made Your servant king instead of my father David, but I am a little child; I do not know how to go out or come in. 8 And Your servant is in the midst of Your people whom You have chosen, a great people, too numerous to be numbered or counted. 9 Therefore give to Your servant an [b]understanding heart to judge Your people, that I may discern between good and evil. For who is able to judge this great people of Yours?”

Proverbs 19:12- The king’s wrath is like the roaring of a lion, But his favour is like dew on the grass.

A life time of hard work won't be enough. You need to tap into the favour of God to enjoy every blessing that God has got for you.

Ecclesiastes 8:4- Where the word of a king is, there is power; And who may say to him, “What are you doing?”

Proverbs 16:10- In the words of a king will result in either life or death.

Once a man of God was walking around with a brief case full of files, folders and papers. And he felt he should prophecy to that briefcase and say, from this day forth you not carry papers but you will carry money and he says that ever since he believed and prophesied and declared that there has been no lack in his life.

No matter what the crisis, the anointing of God will protect you.

Psalm 105:15- Touch not my anointing and do my prophets no harm.

Most of the African countries there are crimes. But in South Africa, they have not been able to kill a single Jew so far. Why? Because the security of the entire country is handled and managed by the Jews. How much more for you and me? Not just for you and me but for all those who are with us, there is protection.

1 Samuel 22:23- 22-23 David said to Abiathar, “I knew it—that day I saw Doeg the Edomite there, I knew he’d tell Saul. I’m to blame for the death of everyone in your father’s family. Stay here withme. Don’t be afraid. The one out to kill you is out to kill me, too. Stick with me. I’ll protect you.”

you. Just imagine the confidence with which David said this to them! Can we say something so confidently?

This anointing will bring you out even from the mouth of the devil! And from all the places he has managed to trap you.

THIS IS A MONTH OF VICTORY!

What you did not see for the last 6 months, you will see it this month.

The anointing of the king is that of victory. You will testify of what God will do in this 7th month.

Genesis 8:4- 4 And the ark rested in the seventh month, on the seventeenth day of the month, upon the mountains of Ararat.

Let your heart and mind be settled and made whole in the presence of God. Let your health and family life become stable. Let your business and finance be established.

Deuteronomy 15:1-2- 12- 15 1-3 At the end of every seventh year, cancel all debts. This is the procedure: Everyone who has lent money to a neighbor writes it off. You must not press your neighbor or his brother for payment: All-Debts-Are-Canceled—God says so. You may collect payment from foreigners, but whatever you have lent to your fellow Israelite you must write off.