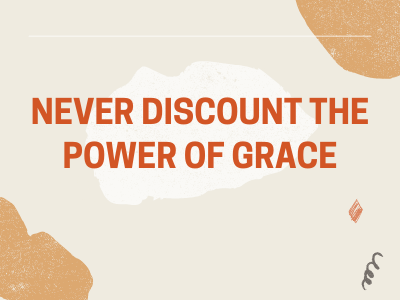 Never Discount the Power of Grace

Never Discount the Power of Grace

1 Corinthians 15: 10- 10 But by the grace of God I am what I am, and His grace toward me was not in vain; but I labored more abundantly than they all, yet not I, but the grace of God which was with me.

Saul became Paul only by grace.

Let all those who receive grace Praise HIM

There are some vipers that come out to bite you when you step out to help someone. The poison of that viper will not sting you, no matter how big and deadly that is.

No matter how influential or money powered it is, it will not touch you. If that viper has come near your house, it may have killed many people in the past and has a deadly history but it won’t enter your home. It won’t kill you. The GRACE OF GOD in you will work against it.

Shake off the bondages of 2021 and stand in the grace of God.

2 Timothy 4:17-7 But the Lord stood with me and strengthened me, so that the message might be preached fully through me, and that all the Gentiles might hear. Also, I was delivered out of the mouth of the lion.

Because of the grace of God, we will be delivered not just from the serpent but also from the mouth of the lion.

Stand within the grace of God and you will see HIM set you free from certain debts that are tying up your life! Stand in the GRACE!

David had a little lamb and that was taken away by the lion. Can you imagine? Would you ever imagine that the lamb would be saved from the mouth of the lion? Lambs are the blessings for the shepherd! In the past, people would kill the goats in their backyard for a meal for guests who would have come home. The lamb is the shepherd’s next generation and that is what the lion was after. But before that lion could finish off the lamb, the grace of God within David finished off the lion!

There is a grace that will cause you to destroy that which is set out to destroy you!! C’mon church bless the Name of Jesus.

2 Corinthians 11:32-32 In Damascus the governor, under Aretas the king, was guarding the city of the Damascenes with a garrison, desiring to arrest me;

There are such people with grace, who will intercede, who will protect and who will bring you out in baskets. They were people in grace who made an escape route from the governor and law makers.

It is the grace of God that worked not just in Paul but also in the disciples.

The Holy Spirit is telling some business people that though there are people and rules trying to shut your business down, God is going to increase your business!

Acts 14:19- 19 Then Jews from Antioch and Iconium came there; and having persuaded the multitudes, they stoned Paul and dragged him out of the city, supposing him to be dead. 20 However, when the disciples gathered around him, he rose up and went into the city. And the next day he departed with Barnabas to Derbe.

o Paul experienced this while people prayed for him; let people received healing in the name of Jesus.

John 4:52- 2 Then he inquired of them the hour when he got better. And they said to him, “Yesterday at the seventh hour the fever left him.”

- This refers to the hour when he began to amend or “got better”. The same hour that Jesus prayed, the repair work began!

The Holy Spirit is saying to someone who has even written down the date for the eye surgery that God is healing your eye.

- Like replacing the spare parts of a car, God is able to replace your sick organs. When God sent you to the earth, he made sure that a spare part of your every organ was available in HIS presence! There are kidneys, livers, brain in His presence. God has got a spare brain!

- Because the enemy will try to destroy your body and mind, God has spares. You need to have faith in the Word of God.

Mathew 15:30-31- 30 Then great multitudes came to Him, having with them the lame, blind, mute, [a]maimed, and many others; and they laid them down at Jesus’ feet, and He healed them. 31 So the multitude marvelled when they saw the mute speaking, the [b]maimed made whole, the lame walking, and the blind seeing; and they glorified the God of Israel.

- Maimed people came to God and they got those parts back. Receive this Word and rejoice in Him. He is the God who calls those things that are not as though they are! I am what I am by the grace of God.

Mathew 15:30 (the New Living Bible)- 30 And a vast crowd brought him their lame, blind, maimed, and those who couldn’t speak, and many others, and laid them before Jesus, and he healed them all. 31 What a spectacle it was! Those who hadn’t been able to say a word before were talking excitedly, and those with missing arms and legs had new ones; the crippled were walking and jumping around, and those who had been blind were gazing about them! The crowds just marveled and praised the God of Israel.

- Those with missing arms and organs has new ones! May the Lord release new hearts and organs. New eyes for you in Jesus Name.

I read last week that docs in the US replaced the heart of a person with a pigs’ heart in a successful surgery. Here the Lord is saying that person with a sick heart will be given a new heart!

2 kings 5:14-14 So he went down and dipped seven times in the Jordan, according to the saying of the man of God; and his flesh was restored like the flesh of a little child, and he was clean.

- People expected Paul to die but he was just fine and started to preach. In Malta island, he conducted a healing ministry. This was just after being almost submerged in water, having a ship wreck! What does that mean? It means that that there may be disease, affliction and bondage all around you, but if you received God’s grace in the midst of it, God will bring you back to your original state.

- You may be wondering if you can do what you did in the past. Can I travel? Can I play? Can I walk, can I eat certain kinds of foods? Yes, you can! God will restore you to your original state.

When does disease come?

Acts 10:38- 38 And you no doubt know that Jesus of Nazareth was anointed by God with the Holy Spirit and with power, and he went around doing good and healing all who were possessed by demons, for God was with him

Disease due to oppression from the enemy. Ask the devil to LEAVE if you see disease in your body!

There needs to be personal hygiene. Bathe, be clean. Some people have no personal hygiene some people eat all the fatty and sweet things. You should be responsible for your life. “Lord, I will take care of my body. I will stay clean, eat right and watch out for it as the temple of the holy spirit.”

Excitement brings vitality. Depression brings ill health. That is why the Lord declares this year to be a year of laughter. Paul says, rejoice and again I say rejoice.

The state of your mind affects the state of your body. Do not allow your mind to go “down”. I got COVID last year and a doctor told me just keep laughing a lot. I did that and God set me free. Proverbs 17:22- 22 A cheerful heart does good like medicine, but a broken spirit makes one sick.

- Before food and after food, have this medicine. At least three times a day- LAUGH! - A merry heart is a good medicine. As a family just laugh together before your meals. There is healing in that.

Proverbs 14:13- 30 A relaxed attitude lengthens a man’s life; jealousy rots it away.

- Tell people sitting next to you – “I am going to grow, increase, the level of my finance, wealth, ministry is going to change, don’t be jealous of me. God’s grace is upon me. You are not going to see me here because God is lifting me to the next level.”

- Paul was not worried about the people who are jealous. Some people enjoy depression and negative emotions.

- Don’t be an elephant. The elephant remembers who attacked it even 20 years ago. It will attack you when ever it sees you no matter how many years it has been. Do not have that nature of an elephant. Pray and bless those who have hurt you and destroyed you.

Hebrews 12:15- 15 Look after each other so that not one of you will fail to find God’s best blessings. Watch out that no bitterness takes root among you, for as it springs up it causes deep trouble, hurting many in their spiritual lives.

- If bitterness comes from you, many will falter.

- Paul is walking in divine health, divine blessing and grace of God because he has learnt forgiveness. Not bitterness. I am what I am by the grace of God.